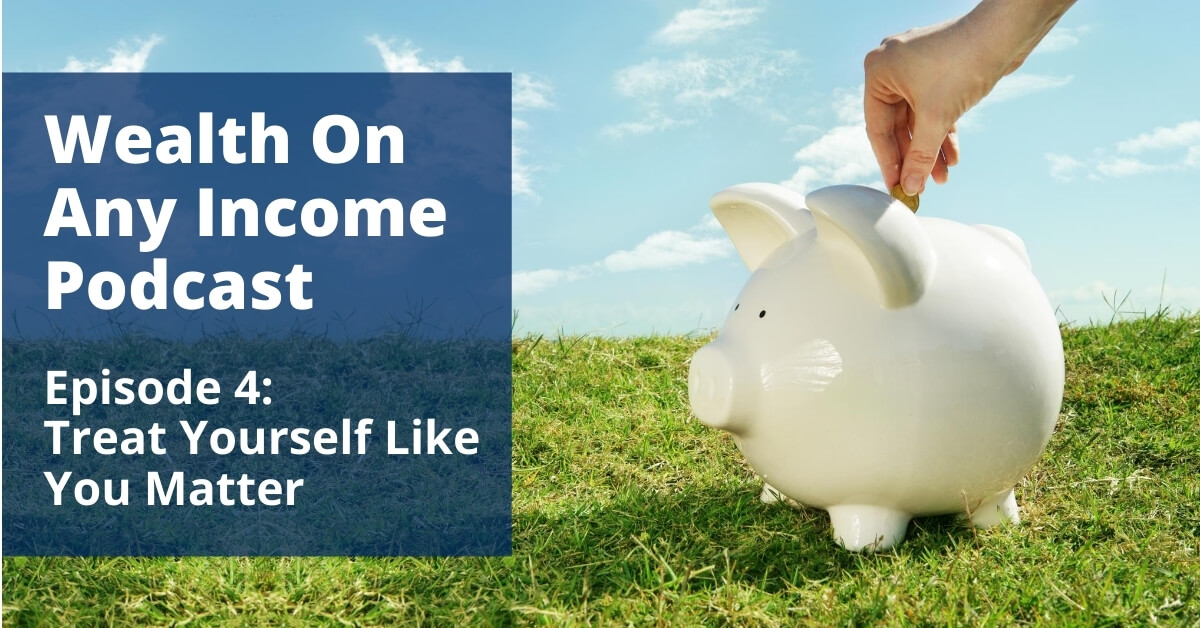 Hi, Folks. Welcome to Episode Four of the Wealth On Any Income Podcast. This episode is about what it truly means to pay yourself first, and it's about seven minutes long.

Paying yourself first is how you treat yourself like you matter. I've mentioned the following in other emails and blogs - that after two divorces and a failure in the art gallery business, I was broke at age 50. I felt I only had 15 years left to fund my retirement. While I no longer use the word retire, we'll use it here because most people have some idea of that concept. I prefer to talk about Complete Financial Choice™, which is something I trademarked.

Anyway, at age 50 I was self employed, I had no IRA or pension plan, I had little government benefits like Social Security to lean on, and with only 15 years to gather money for retirement I had to take some massive action and calculated risks. Either I was going to be eating cat food instead of tuna, and live on the streets, or I was going to save and invest enough to have a somewhat decent retirement. I might have to watch my pennies, but at least I'd have some pennies to watch. In my gut, I understood that I had to build a net worth, even though I had thousands of dollars of credit card debt. So what I did was I used a concept that's 5000-years-old called 'Pay Yourself First'. Not enough people properly understand and use this concept.

I've spoken in front of thousands of people and often when I asked someone in the audience to explain this concept, some people have said things like, 'that means I pay my rent first' or 'I buy groceries first.' That is not treating yourself like you matter and paying yourself first. That's treating the landlord or the grocer first, not you. When you pay yourself first you take some money from what you receive and immediately put some amount aside to keep forever. It can be from a paycheck, a commission, a coaching or consulting fee, a rental payment or any other form of income. It could be 5%, 10%, or more that you set aside first, before you pay anyone else or your bills.

It's like training for a marathon. You don't start by running 26 miles, you start wherever you start. For me, I started my marathon training by running two blocks. When I started to pay myself first I started at 10%. If I was paid $100, I set aside $10. In a short period of time, I increased it to 26% which also included the income taxes I would have to pay. Remember, I was self employed. You might have to start at 1% or 3% - what's important is getting started at any amount.

I had a client many years ago in the construction business. He was a general contractor. He was complaining the money would come in one hand and go out the other. After he made payroll, paid for materials and taxes and whatever. There was nothing left over to save. I suggested he start start small, like 1% of his gross revenues. I made fun of him by saying there's no way he would suffer just taking away 1% off the top. He did that. And after a couple of months, he increased it to 2, then 3%. By the time six months elapsed, he'd accumulated $50,000 that was available to be invested. During that same six month period, I made other suggestions about his business. And he was the type of entrepreneur that if he thought it was a good idea, he took action on it. By the time we completed our coaching after six months, his net worth has grown by about $600,000. That's the result of taking action on the coaching.

Like I mentioned earlier, the concept of paying yourself first is 5000-years-old. You may have even read the book - The Richest Man in Babylon - where it's explained. In the book, they actually have some transcriptions from the clay tablets that were discovered between 1899 and 1917. With the excavation of the city. Babylon was the richest city state in the ancient world, 5000 years ago, sort of like the United States is today.

You may have even started to apply this practice. But if you read the book, and did not start to pay yourself first, then now is the time to start. If you did start, but stopped, it's time to start again. And if you've been practicing this after reading the book, now is the time to increase what you keep for yourself. Again, this concept in practice has withstood the test of time. It's helped people create wealth for 5000 years, and it will still be working when you and I are dust, and you can become secure and wealthy from this practice. In my case, it took three years to save $18,000 and I was able to partner with my last, final, and best wife and her realtor partner, to buy a three-unit apartment building. That was the beginning of my real estate investments and ultimately created a multi-million dollar net worth.

Return to podcast by clicking here.