Episode 2: The Wealthy Use A Team Approach – Transcript 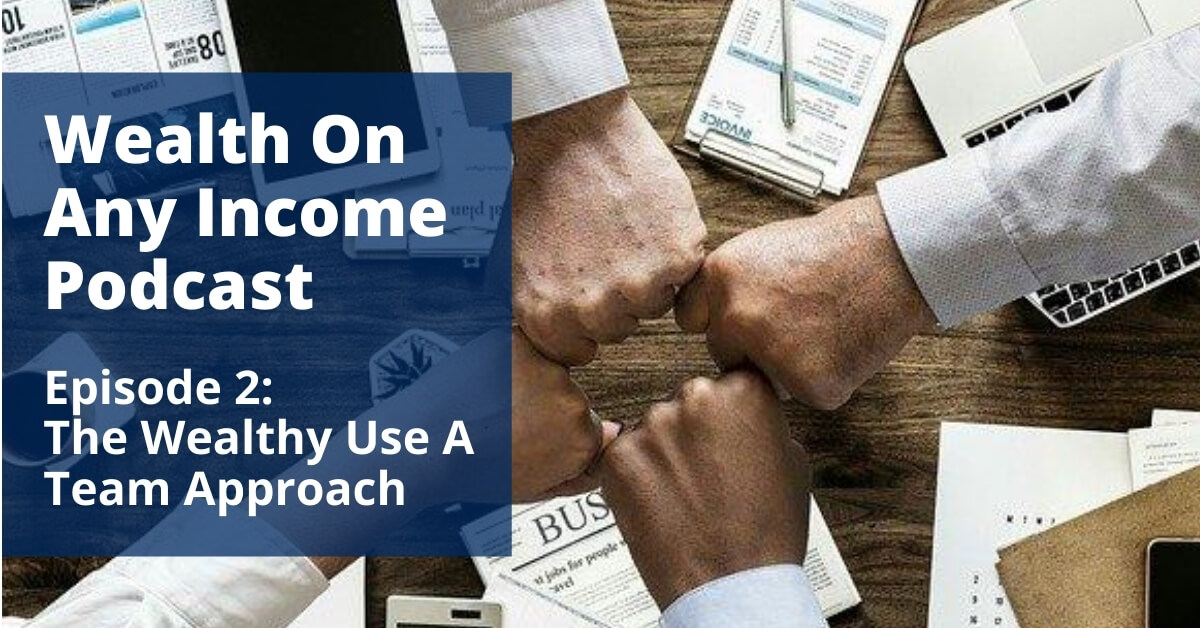 Hi, Folks, Welcome to Episode Two of the Wealth On Any Income Podcast. This is about using a Team Approach to Create Wealth.

You'll see most of my broadcasts will be short and powerful. This one is about eight minutes. I want you to look at wealth in a new way. I want you to see that it's available to you, and it's never too late to start. It doesn't matter if you're 24, 44 or 74.

Several of the next few episodes will be conversations based on my recent book, Attitudes Of The Wealthy. In that book, you can read the 32 attitudes that start with "Asking For Help" and end with "It's Never Too Late".

Before we get to my newest book, let me explain why my first book was titled Wealth On Any Income and why these Podcasts have the same title. After my first divorce, I was provided business coaching to financial planning and accounting firms and only earning about $5,000 per month. From that income I was paying myself first $500 per month, a powerful concept we'll cover in another episode. Well, it took me three years to save $18,000. I put it all into the purchase of a three unit building with my wife and a realtor. Within six years, that purchase alone created a half a million dollar profit. I borrowed more money to make down payments on more apartment buildings. And within eight years, I had a multi-million dollar net worth. This is all based on my earning $5,000 a month and saving $500 a month. That's the basis of Wealth On Any Income. If a kid who failed high school math can become a multi-millionaire, just by copying what other wealthy people do, then you can do the same.

You have to be aware that Hollywood movies, TV shows, books, the scripture, and even fairytales - have indoctrinated you to believe that only the poor are good and noble, and that the wealthy are mean and evil. In a future episode, I'll go into detail on this. One of the first things I need to tell you is that you should not fear becoming wealthy, as though that might somehow corrupt you or make you a bad person. Here's my favorite quote on wealth, and it comes from Warren Buffett, "Of the billionaires I have known money just brings out the basic traits in them. If they were jerks before they had money. They're simply jerks with a billion dollars."

As you know, one of the most important keys to creating wealth is the right attitude. And so that's what I believe is the most important to present in my first few episodes. These are the attitudes that wealthy people operate by that ordinary people aren't even aware of.

These new attitudes saved me, and now I'm sharing them with you. These attitudes are the difference between your leading a life of poverty, struggle or mediocrity versus leading a life of financial and emotional prosperity, and your ability to donate to the causes or the charities that touch your heart.

While I operate by most of these attitudes, I'm not perfect. You could guess if I were to operate by all of them, I probably be a billionaire. Instead of a multi-millionaire. You get to choose how many you want to operate by in your life. And even with my thinking small, I've done well when compared to the bulk of the population. If you just focus on maintaining a few of these attitudes in your life, on a consistent basis, you'll have the mental and emotional foundation to create wealth for yourself, and be in a position to donate to the causes that touch your heart. And this is not just about money, you'll also see your relationships improve as well. As you change, grow and transform as a human being, you will see there's a shift in the people around you and the planet as well.

At the end of many of these episodes, I'll ask you a question that hopefully will lead you to action, or at least thinking in a new way. These are the questions that give you an opportunity to grow your skills in handling money and move toward a place of wealth, abundance, and fulfilling relationships.

Here's what I believe is the first and most important attitude. It's one of the things I say over and over again, "Wealth is a Team Sport, Not a Solo Sport. If you look at the wealthiest people in this country whether past or present, they did not create massive wealth by themselves. The concept of the self-made millionaire is a fantasy, and people who say they are self-made millionaires are both deluding themselves and are full of themselves. Every successful company has at least a visionary and an execution master. Steve Jobs did not design or make Apple computers. Howard Hughes did not build the Spruce Goose or any of his companies or casinos by himself. J. Paul Getty did not become a billionaire by himself. One of the things he said in his book was that he would rather have 1% of the efforts of 100 people than 100% of his own efforts.

When you create your team it should contain people with different skill sets. If you, your partner and all the other founders of a company are great salespeople, it will likely fail. There needs to be a balance of skills from sales to design - or implementation to accounting. In my real estate business, we had one person who found the properties and he had the imagination on how to remodel them. I had the management skills, and I oversaw the remodeling work. Also, I found qualified tenants and took care of those tenants. After all, it was their rent that was buying real estate for us. Our assistant took care of all the bookkeeping, rent reconciliation and payments. We had subcontractors that were skilled and perform the physical work. It was all of this that built a million dollar, multi-million dollar business.

Look at how you're building your career or business, both internally and externally. Your partners or co owners are your internal team, your external team contains the people you can hire.

And here's your opportunity to grow. Ask yourself, who are the people on your team? Do you have a coach, an accountant, an attorney, a banker - who supports you with your marketing and technology.

If you want to have a conversation about how you could structure your team, please reach out and we'll support you. Have a great day, a great evening or whenever you're listening to this podcast.

Return to podcast by clicking here.